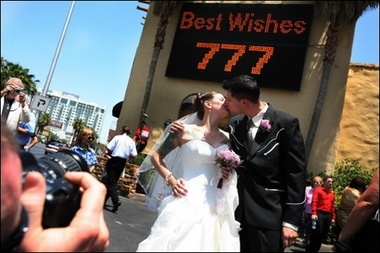 You may find yourself part of the many television shows which have featured our weddings and Las Vegas wedding chapels: From CSI Las Vegas filming at our wedding chapel ( For more information on CSI Las Vegas) to recently being on 'The Best Dam Sports Show" With Tom Arnold On Fox, Love Nest on CMT, The Daily Show with Jon Stewart, Extra Sharon Osborne Show, The Ultimate Revenge, Dinner and a Movie on TBS, Entertainment Tonight, NBC Nightly News, The Tonight Show with Jay Leno, Christopher Lowell Show, The Billboard Awards, VH1, MTV, NBC News, A&E, The Learning Channel, CBS Morning Show, Animal Planet, Soap Talk, The View and The Today Show! Katie Couric of The Today Show. Katie was so intrigued by the variety and style of our weddings that she sent a film crew to feature us on her show.

So join all those celebrity couples who have tied the knot in one of the most romantic cities on the planet---Elvis and Priscilla, Erin Brockovich and More. 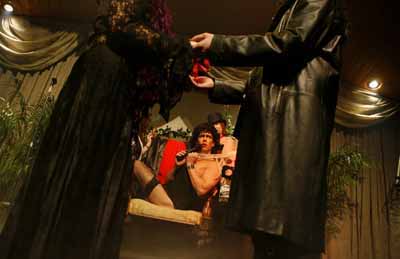 "But the norm is a bit different, several chapel owners say. A wedding like Spears' — she married a childhood friend on the spur of the moment — is unusual. Most involve couples with some romantic relationship and are planned at least a few days or weeks in advance", says Jamie Richards, owner of the Viva Las Vegas Wedding Chapel.

"I hate it when something like (the Spears wedding) happens, because it makes it sound like Vegas weddings are just a dime a dozen," he says. "Yes, they're easy to do, but they're not meaningless. The people who are in this business are still in this business to marry people. It's not a joke." Read the whole article here. 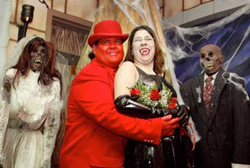 The Viva Las Vegas Wedding Chapel offers a Gothic ceremony where the minister rises out of a coffin through fog. The happy couple can then retire for the night to the Gothic bridal chamber with a coffin-shaped bath and a graveyard bed with a headstone reading "Till Death do Us Part." And if creepy is not your thing, other wedding themes include James Bond, Disco, Western, Egyptian or Liberace Click here to see it!

New Year's Weddings in Las Vegas is always fun and busy, check out the report here from Channel 8 News. Click here to view.

Recent visitors to our wedding chapels...
include Ashton Kutcher from "That 70's Show and Brittany Murphy from 8 Miles were here with Access Hollywood, no not to get married! But to promote their new film "Just Married"! Watch Access Hollywood the week of December 16th, 2002 to see their interview filmed at Viva Las Vegas!

Most recently our chapel has been featured on the the Christopher Lowell Show - still airing on the Discovery Channel, The tonight show with Jay Leno, CBS Morning Show and The Discovery Channel’s Viva Las Vegas. We’ve been seen on The Travel Channel 12 out of 22 times in specials highlighting Las Vegas. The Discovery and Travel Channel’s listed Viva Las Vegas Wedding Chapel as a must see in Las Vegas! Congratulations to Ron Decar's Las Vegas Hotel. The "E" & "P" Suite was voted #6 by the TravelChannel’s "Top 10 Hotel Suites in Vegas".

Psssss...a film crew from CMT was recently seen filming in our wedding chapel for a new Television series. Watch Love Nest in February 04 on the CMT channel for a series featuring Ron Decar and Viva Las Vegas Wedding Chapel! Spotted in Las Vegas Ed Helm from the Daily Show with Jon Stewart (Comedy Central) in the Chapel.

Whispers...Sharon Osborne Show, Travel Sick on Comedy Central, Extra, The Ultimate Revenge, Dinner and a Movie on TBS and The View.

You may find yourself part of the many television shows which have featured our weddings: NBC Nightly News, The Tonight Show with Jay Leno, Christopher Lowell Show, Oprah, E Television, The Billboard Awards, VH1, MTV, The Travel Channel, NBC News, A&E, The Discovery Channel, The Learning Channel (TLC.com), The Fox Millennium Show, Time Magazine Millennium Edition and Katie Couric of The Today Show. Katie was so intrigued by the variety and style of our weddings that she sent a film crew to feature us on her show.

Join all those celebrity couples who have tied the knot in one of the most romantic cities on the planet Las Vegas. Celebrity marriages include Elvis and Priscilla, Erin Brockovich, Richard Gere, Bette Midler, James Caan, David Cassidy, Cindy Crawford, Dudley Moore, Paul Newman, Dennis Rodman and Penn Jillett....just to name a few

But if you're into a more funky brand of wedding, may we suggest the Viva Las Vegas Wedding Chapel? Name a theme, and the people here are apt to find some way to pull it off, from “Star Trek” to Hawaiian to full-tilt Vegas, complete with showgirls and Elvis. Marriage may be a serious thing, but who says a wedding has to be?

Brought to you by the Las Vegas Review-Journal. Nevada's largest daily newspaper March 17, 2002.

If history and charm aren't your style, check out the menu of themed weddings at Viva Las Vegas Wedding Chapel. The outgoing crew here offers everything from an Elvis "Blue Hawaii" wedding with hula dancers to an intergalactic-themed wedding, to a "Camelot"-type wedding to a gangster wedding. You know, as "Who Wants to Marry a Multi-Millionaire" showed us, it's high time somebody took the seriousness out of marriage.

Brought to you by the Las Vegas Review-Journal. Nevada's largest daily newspaper March, 2000.

We are pleased to announce the winners of the Elvis Wedding Competition Juliette Massey and Dani Leighton of Manchester.

Juliette and her Romeo, Dani will get married at the "Elvis Experience" in Blackpool on August 16th at 8.45 am then dash to the Airport and fly to Vegas to be married all over again on Elvis' 25th Anniversary. They will be met at Las Vegas Airport by the "Viva Las Vegas Wedding Chapel" resident 'Elvis' and driven immediately to the Courthouse to obtain their marriage licence. They will then driven to the world famous "Viva Las Vegas Wedding Chapel", greeted by showgirls for the "Elvis Blue Hawaii" Ceremony.

TV, Radio and Press will be everywhere to record the happy moment with millions of television viewers experiencing this very special event. Before you can catch your breath, after toasting the Wedding with Elvis Presley Champagne they will be whisked away to the Airport to fly to Las Vegas to be married yet again on August 16th in an Elvis Wedding Chapel then spend four nights on honeymoon in Las Vegas in a luxury hotel .... all for FREE.

A wedding dream come true for a UK couple. Click here to watch the video. *You must have realplayer or realone to view this video.

All Night Long, Ron Decar's Las Vegas Hotel and our chapel are featured as one of 11 places to go in North America by Playboy Magazine!

BILL GEIST: GOING TO THE CHAPEL...

"Still can't find the answer? You might consider scrapping it all and going to the classic: VivaLasVegasWeddings.com!" — Sabrina Rojas Weiss

E Nevada Award We were voted one of the 10 most innovated web sites by E Nevada Awards 2001 and IBAN out of 78,000 Nevada business.

Ron DeCar owner and operator of Viva Las Vegas Wedding Chapels was featured in Parade Magazine, September 9, 2002 as part of a special issue, "Our American Spirit!" Thank you Eddie Adams and Parade Magzine for the honor of being part of this very special issue.