It was a dark and breezy summer night in Las Vegas. A perfect night for a wedding. There was an unsettling feeling that I just couldn’t shake. My job was to pick up my next Bride & Groom and chauffeur them to the wedding chapel. I arrived at the Luxor hotel and they began to slowly walk towards me. There walk was almost rhythmic, as if a drum would beat with every step they took. The couple had their friends in tow and they all seemed out of it.

I began to see blood, a steering wheel and a handsome couple….just then, it hit me! They would have driven themselves, but they died on their way to their wedding. The prom queen was invited to the celebration, but she too had an accident of her own. These lovebirds were in full Zombie regalia and mode. For this young couple it was easy to stare into each others eyes as their Minister led them into…the dead zone. 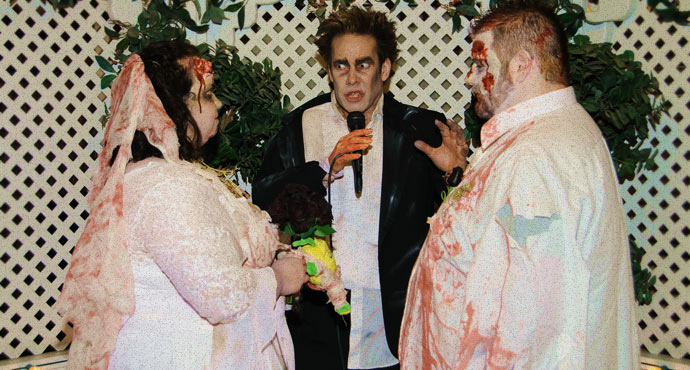 Happening TODAY: Gwendelyn and Eric Renew Vows on Their 20th Anniversary with Elvis in the Doo Wop Diner!